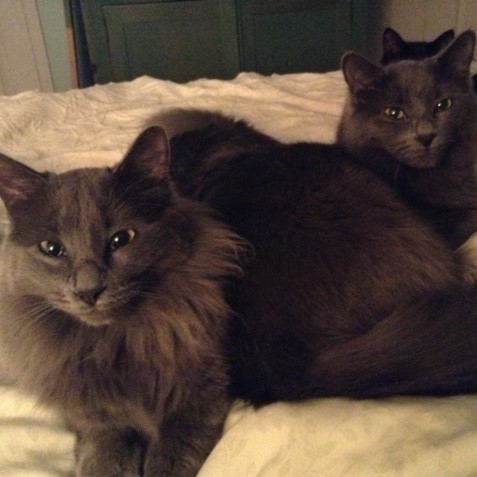 Bio from the Foster mom:

Luke is the short haired of the pair; he was born in the fall of 2014 and rescued at about 12 weeks of age.  At the time of rescue he was with a female, Lidia, and a number of other kittens.

They were placed in a foster home briefly living in a large enclosure. They were removed from the foster home and Luke and Lydia were placed with me. At the time, I had a litter of other kittens plus two of my own and a large dog. Lydia and Luke were extremely frightened of any human contact and tended to stay with each other. They would play games if I did not get to near to them. They ran away is touched but loved playing with anything moving under the door (an extendable pointer). Unfortunately, I did not have a lot of time to focus on them, so their progress was very slow.

They have been with me for five years and I have been encouraged by gradual improvements in their socializing. They have never been aggressive with me.

In the night one of the two will tap my face with a paw and start licking my cheek. If I don’t respond he/she will give me nose butts. Fortunately, he/she also recognizes “Time to sleep”, and will settle close to me.

Luke has been the more adventurous of the two and very early on he would come on my lap to eat popcorn. It was only for the popcorn, though! He enjoys playing with swinging wands and under the blanket moving toys. He also loves to escape when my cats are let outside. They tend to take their time to exit and enter through the door, so he makes use of the opportunities. When I first had him I would search for him but finally realized he knew his way home, and I do not worry so much now. He is not a “talker” so he does not demand to be let out.

He caught on very quickly to the treats in a ball toy and almost instinctively knew he should bat the ball with his paw to get the treats. Lydia has yet to learn that.

Both do not like to be picked up and they have been difficult to catch to take to the vets.

I really do believe they will continue to improve when they are on their own in a home with only adults. There may be regression in the beginning as they get used to new people and it will be very important to have them in a room where there are not many hiding places.